High above the Arctic Circle, Gabriel Welker and his students at Arctic Village School are using hydroponics to grow fresh vegetables while learning about STEM, nutrition and conservation—even while in the depths of a long and dark winter.

Gabriel moved from Tennessee to Arctic Village, Alaska in 2021 to teach 6th-12th grade math and science in one of the most remote villages in Alaska. The land and local Porcupine Caribou herd has been stewarded by the native Gwich’in Athabascans for thousands of years.

Gabriel says, “it has been an exciting opportunity to work with this generation of caretakers and to expand their knowledge into the field of hydroponics.”

While growing up in southeast Iowa, Gabriel didn’t always aspire to be a teacher. “I actually spent about five years [after college] working other careers that spanned from landscaping to bookkeeping at a cemetery,” he tells us. “It wasn’t until after 2020 that I decided I wanted to become a teacher. I decided to become a teacher because I realized it was the area where I could make the greatest positive impact on those around me.”

Now in a land of harsh winters and long, icy nights, Gabriel is making that impact with Green Our Planet’s Hydroponics STEM Program. He has always been interested in alternative agriculture like hydroponics and was excited to learn that Arctic Village School had signed up for the program.

With enthusiasm from the school’s principal, staff and students, Gabriel started the school’s hydroponics journey with the commercial system, which can grow over 200 plants at a time. This captured his students’ curiosity and gave them the chance to try the fresh vegetables they had grown themselves.

Gabriel tells us that the process of getting the system up and running, starting the seeds, transplanting them and caring for the plants has been an amazing learning experience for his students. But their favorite part? Harvest Day! 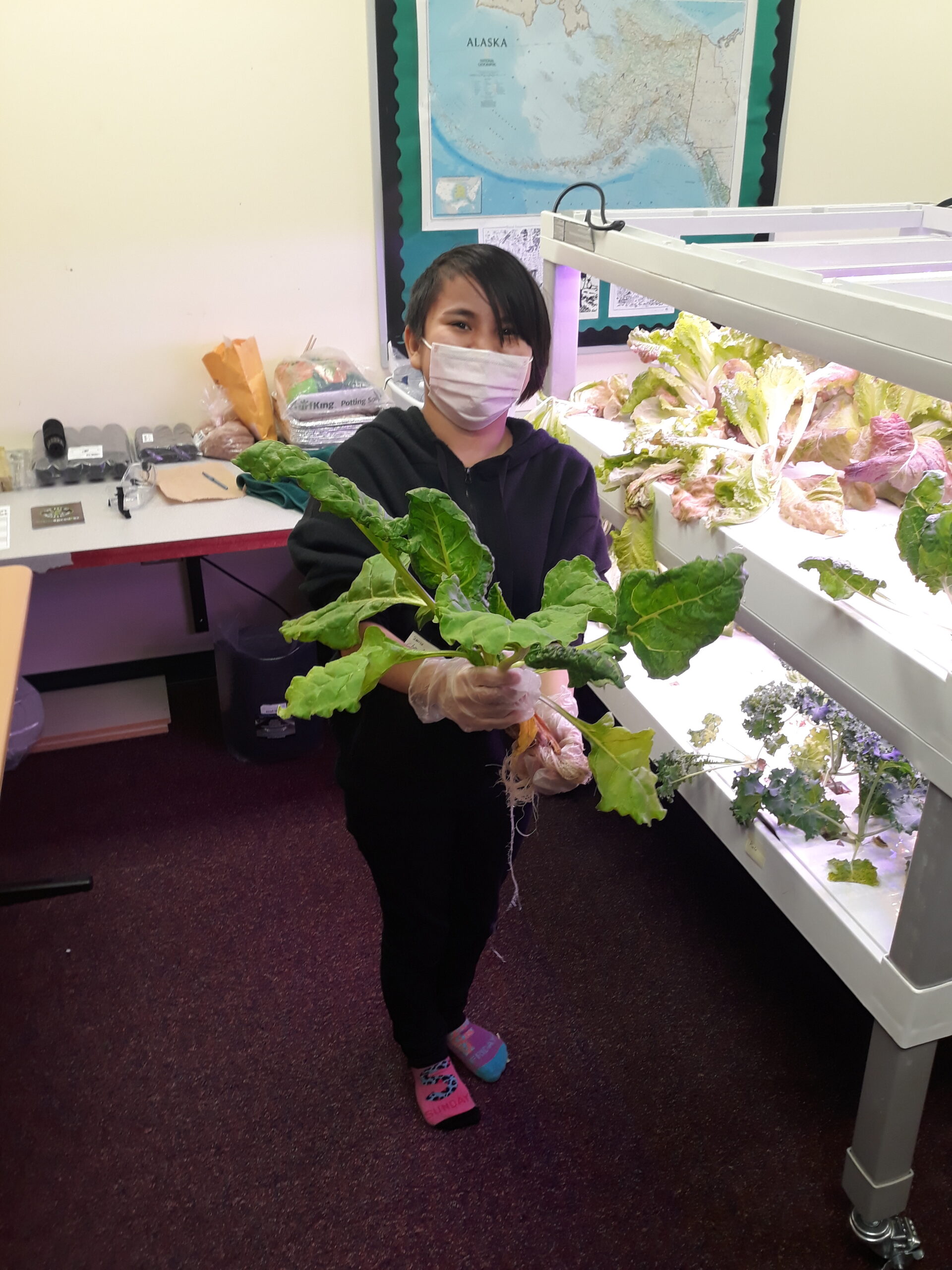 “By the end of the class, the students had enough to eat and take home to share with their families,” Gabriel said. “It was a blast to sample all the different varieties of lettuce we had grown and see the students having fun while chomping down on a fresh leaf of lettuce.”

Gabriel has big plans for incorporating hydroponics into his science and math lessons for the rest of the school year. Students will be planting and trying a larger variety of vegetables and experimenting with different hydroponics techniques.

Gabriel offers the following words of wisdom for fellow teachers: “Keep things simple and just go for it! One individual can make this begin for a class. The learning process, for me, has been a lot of fun.”

Thank you, Gabriel, for putting your heart and soul into educating the next generation of caretakers and for bringing STEM to life through hydroponics for your students! 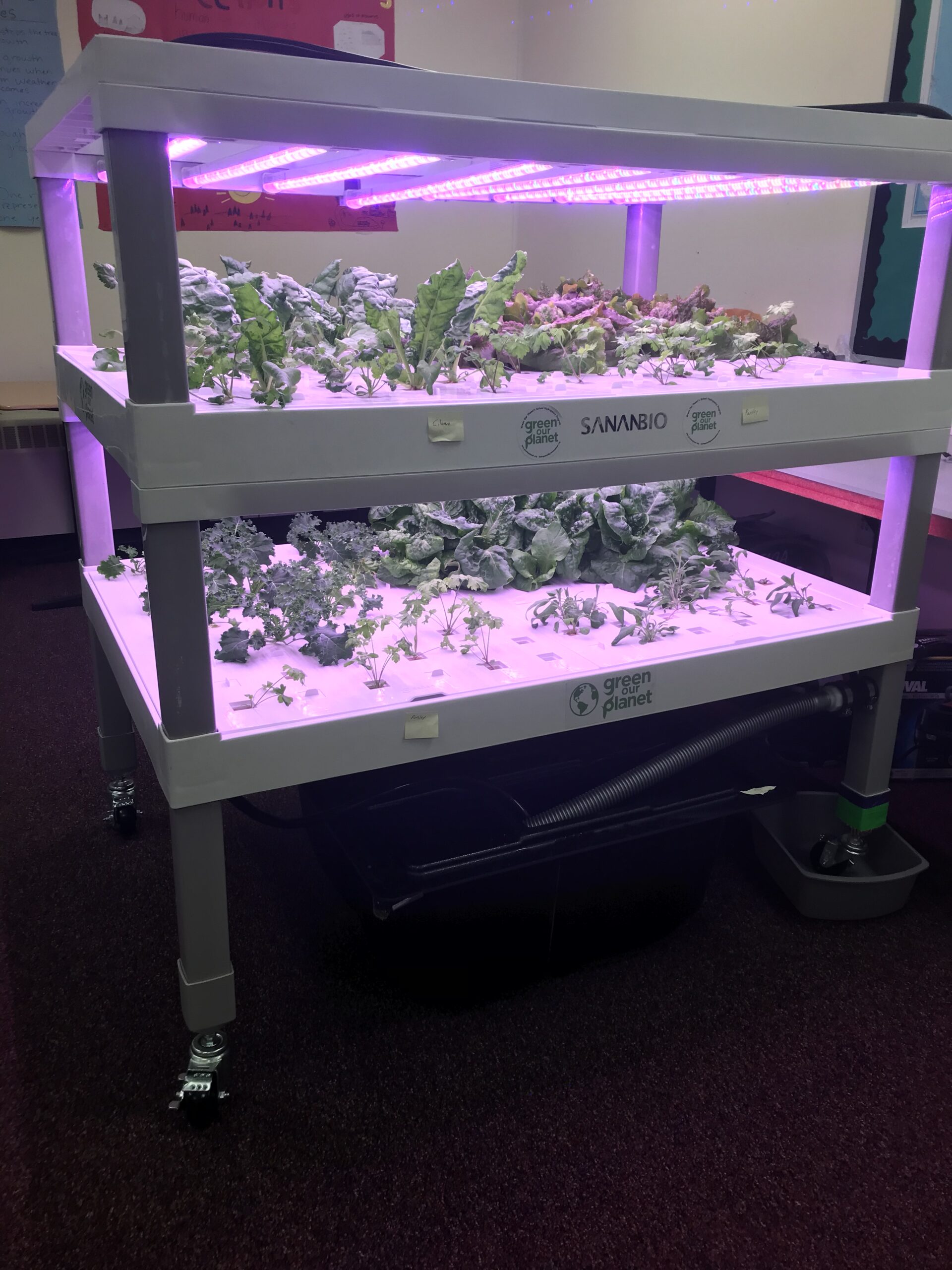 Get free hydroponics lessons, aligned to Next Generation Science Standards!

“They have to learn how to plant this stuff, grow it, sell it, use the money to reinvest [...]

As a busy teacher, you may not always have time to cook a healthy meal from scratch. But when you're under [...]

What has Green Our Planet Been Up To In February 2022?

Green Our Planet has been up to a lot in the past month! We have been working hard on new projects [...] 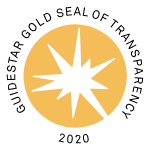